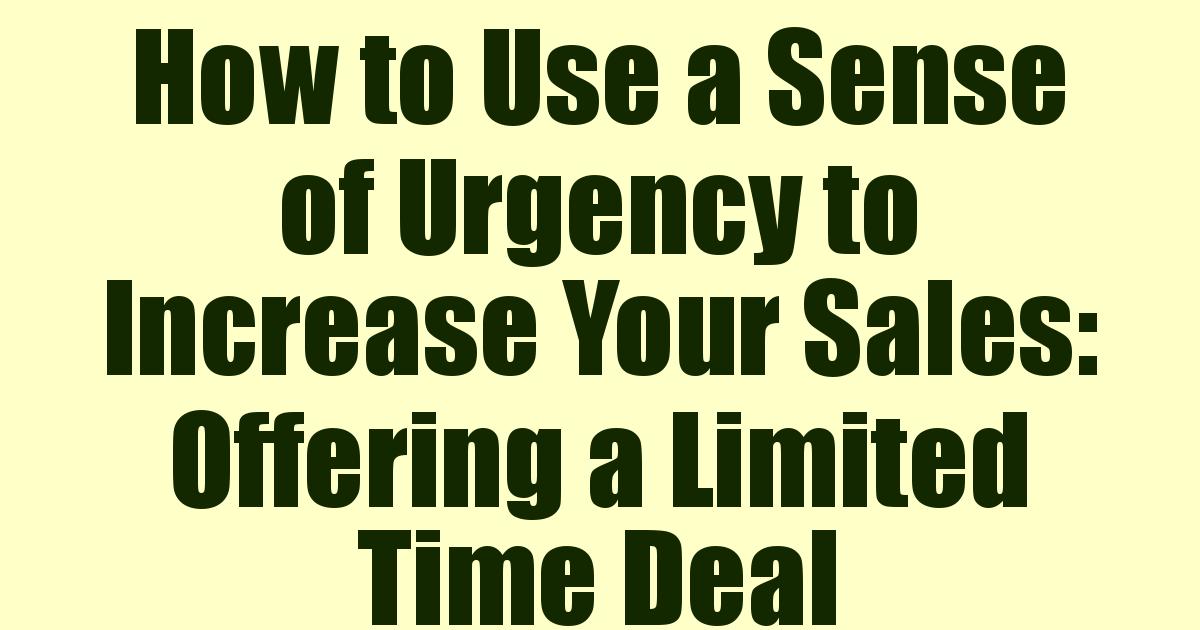 A sense of urgency can be a great motivator, both in encouraging a sale and in life. To use urgency in business, look at offering limited time deals, especially ones that don’t last more than a few days tops.  And if you have an e-mail list, mail them a lot more on the final day with reminders to the deadline.  You’ll often get most of your sales on the final day! Countdown timers can be another great way to emphasize this.  The idea is similar to furniture stores that seem to always have sales that end on the weekend… even though we all know they’ll probably have another sale in a week or two, we’re more likely to buy now if we think there’s a sale on it now vs. later.  People like to procrastinate, so limited time deals can get them off their butt to take action.

For example, if you run a gym, you may run a sale on gym membership, where if they sign up over the next 3 days they receive a discount on the total price, or X amount of personal training sessions as a bonus. The time limit creates a sense of urgency, encouraging people to buy that may have sat on the fence or procrastinated otherwise.

One huge marketing tip that we’ve perfected over the years, which has made us a lot of money, is a limited time deal method that we call the 3 Day Money Maker or the 1, 2, 3 Limited Time Offer. It can especially work well if you have an e-mail list and can e-mail them about the special offer.

Here’s how it works. You setup a special offer (ideally either a big discount like 50% or a big bonus to include with it) that only lasts for three days. We typically either start this on a Thursday or Friday and have it end over the weekend on midnight (either Saturday or Sunday night). On the first day, you only e-mail your list once to announce the special deal, provide them with a link to the sales page to buy it, etc.. You then tell them that the deal ends on midnight on X Day (three days from then). You typically will get some initial sales then, but not necessarily a ton. Then on the second day, you send them one e-mail in the morning and one e-mail later in the afternoon or evening. You likely will get few if any sales then, but that’s okay. The third day is where the real magic happens. On the third day, which is the final day of the sale, you e-mail them once in the morning, once in the mid to late afternoon, and once in the late evening. Your subject lines should increase the sense of urgency with lines like “Final Chance – 50% Off Deal Ends Today” and “Only Hours Left to Save 50%” or “Final Warning – Deal Ends in a Couple Hours” (they don’t have to be exactly that, but you get the general idea of making it seem urgent).

The final day, especially the final hour or two, will get A LOT of sales typically, especially in the final minutes of the special offer. In fact, we’ve found that if you leave the offer up until the morning, you can get several sales in the wee hours of the morning that think they gamed you by getting the deal just after it technically was meant to close. Using this method properly exactly as we laid out can make some businesses more money over a few days than they might make in several weeks or more!

Think about how you can create a time sensitive deal where people only have a limited time to take you up on it. The sense of urgency encourages people to buy. If you have an email list, constantly remind people of the deadline, as often the most sales will happen in the last day near the end.